Assemblyman Jon M. Bramnick is serving his seventh term in the New Jersey General Assembly representing Union, Somerset, and Morris Counties in the 21st District. Assemblyman Bramnick was elected by his colleagues in November 2017 to serve his fourth term as the Assembly Minority Leader, making him the highest-ranking member of the Republican Caucus in the Assembly. 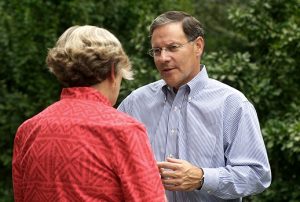 Assemblyman Bramnick holds the title “Funniest Lawyer in New Jersey” after winning contests sponsored by the New Jersey State Bar Association (NJSBA) at Rascals Comedy Club. He often volunteers his services as a comedic auctioneer on behalf of non-profit organizations.

He is a certified civil trial attorney and a frequent lecturer for both the New Jersey Institute for Continuing Legal Education and the American Association for Justice. He served as President of the Richard J. Hughes Inns of Court, an association of professional attorneys dedicated to teaching young attorneys. He was named the Professional Attorney of the Year by the Union County Bar Association.

Assemblyman Bramnick holds a B.A. in political science from Syracuse University, where he was elected to Phi Beta Kappa. He also holds a J.D. from Hofstra University’s School of Law. He resides in Westfield with his wife Patricia and has two grown children, Brent and Abigail and has a granddaughter, Lacey.